The clubs youngest members Chloe Eyles and Katie Davie chose to complete their challenge across a month to fit between school work and other activities. Chloe swam the 80 miles from 21st June to 21st July, whilst Katie ran the distance.


On Friday 21st July Reg Ayre, Emma Davie and Georgina Davie cycled 80 miles from Barnstaple to Exmouth as part of the Coast2Coast challenge organised by Farms for City Children. The trio faced rain and wind throughout the day, but were pleased to have completed the route which passed through Hatherleigh, Winkleigh, Thelbridge, Sandford, Upton Pyne and Exeter in 7 hours 47 minutes. The group are raising funds for Farms for City Children's Nethercott House in Winkleigh. If you would like to sponsor the members, visit www.justgiving.com/fundraising/newtonstcyresyfc. 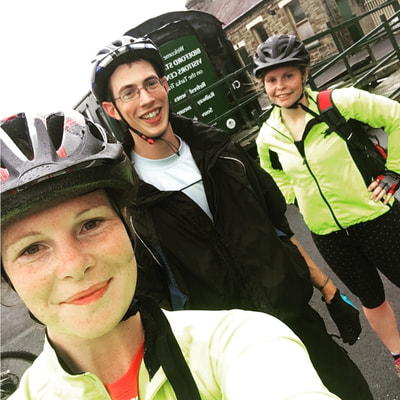 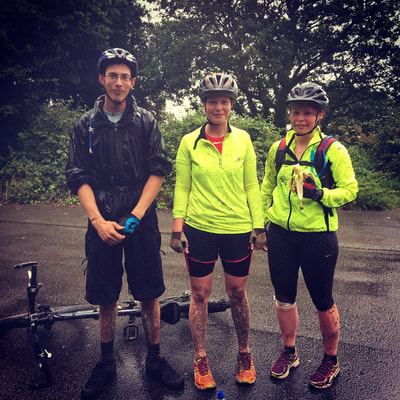 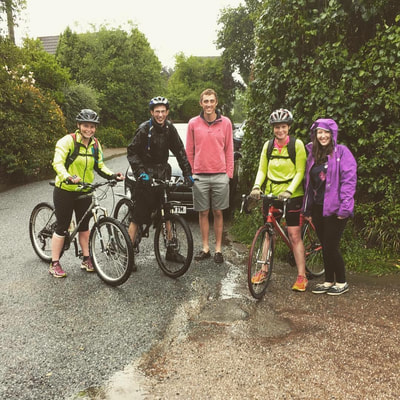 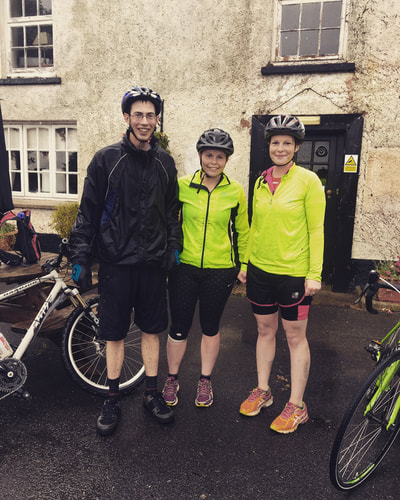 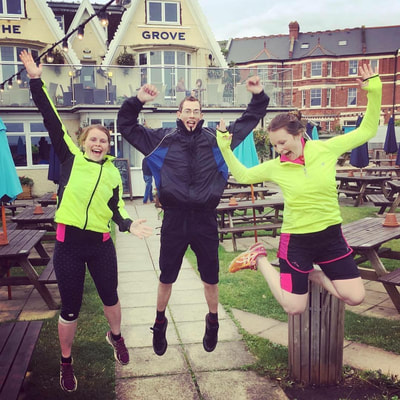 Click to enlarge image
The 80 mile challenge is part of the clubs 80 year anniversary which will also include a Dinner and Dance on Saturday 11th November. The evening celebration will be held at Highbullen Hotel with guest speaker Matt Smith, a New Zealand sheep farmer and world record holder. If you would like more information about the clubs dinner, contact the chairman Georgina Davie on 07801273424.
​Newton St Cyres - May 2017
In March we held our annual dung sale raising around £500. A big thanks goes to Matthew Crooke for organising it, providing the dung and doing most of the deliveries and to David Trigg for supplying the bags. Also in March, 15 members attended a clay pigeon shoot, kindly hosted by the May family, at Netherexe Farm. Our fortnightly club meeting was held at the new Devon Rural Hub on March 28th. This gave members an opportunity to see how some of the money we fundraised was used. Thank you to Nick Creasy who gave us a tour of the building.
The Devon YFC Outdoor Activities Day was kindly hosted by the Bellew family on 10th April. Newton members did a fantastic job helping Haldon group take the trophy home for the most overall points, winning prizes for activities such as tractor handling and block laying. A massive ‘Well done!’ goes to everyone who competed.
​
This year the club will be celebrating its 80th year. To celebrate, a few members are completing a variety of challenges embracing the number 80 all in aid of Farms for City Children. Emma and Georgina Davie will be cycling 80 miles from the North to South coast of Devon on 21st July. Chloe Eyles will be swimming 80 miles, and Katie Davie will be running 80 miles, between 21st June and 21st July. You can donate online, via their collaborative JustGiving page: https://www.justgiving.com/fundraising/newtonstcyresYFC (Link to Site)
Newton St Cyres - February 2017
Winter time does not mean quiet time for Newton St Cyres YFC. Over the past couple of months we have been joined by guest speakers at two of our fortnightly meetings: Katie Wade & Dr Tessa Stone from Farms for City Children and Richard & Heather Gibson from Aid for Samburu, who both gave really informative talks which were enjoyed by members.
At the beginning of December, a few of us got in the festive spirit and made our Christmas wreaths. A big ‘thank you’ goes to Fran Hutchings for teaching us and to Sandie Turner for hosting the group and supplying mulled wine and mince pies! 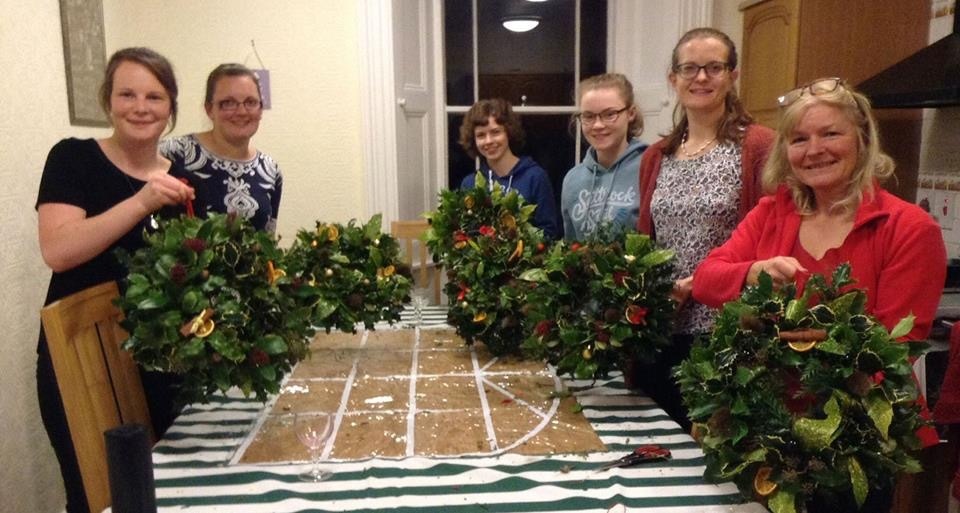 The 17th December saw lots of members head to the Devon YFC Christmas Ball at Exeter Livestock Centre. Radio 1 DJ, Chris Stark did not disappoint and a great evening was had by all. The following day over 20 members headed to The Red Lion, Shobrooke for the club’s Christmas meal. There were a few sore heads, with some arriving on foot or bike,  but it was nothing a good meal couldn’t fix.
​ 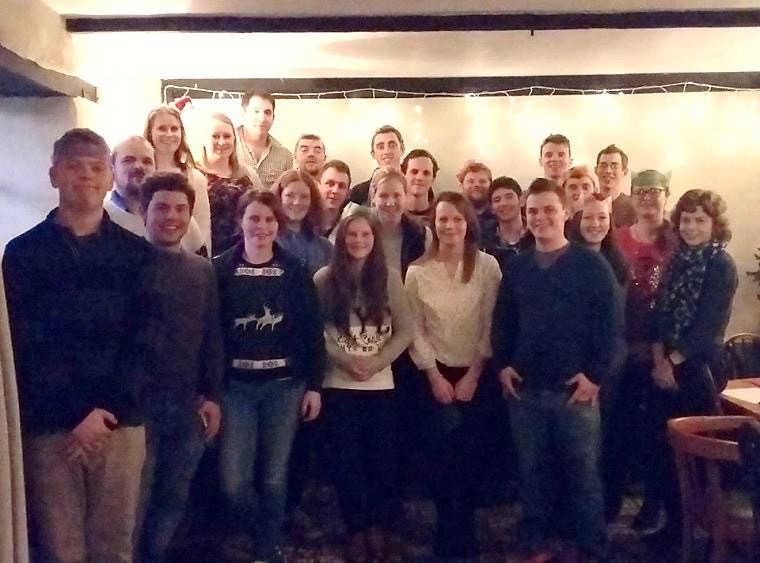 An evening of carol singing was held on 20th December. A big ‘thank you’ goes to The Red Lion, Shobrooke, Fiona and Jeremy Ayre, and club president Stuart Luxton and Kathryn for hosting us.

In January, some of the members joined forces with members of Bow YFC to take part in the entertainments competition directed by Newton member Millie Murphy. The team competed in the Haldon group round at Queen Elizabeth’s Lower School on 4th January, coming 2nd place. The Haldon group round of the Senior and Junior Member of the Year competition was also held on this day. Our club chairman, Georgina Davie, placed 1st in the senior competition, will go forward to the Devon final in Exmouth. Katie Davie was placed a fantastic 3rd in the junior competition. We wish Georgina the best of luck at the Devon YFC finals, taking place on Sunday 19th February.

On 11th February we held a jumble sale to raise money for our 80th Dinner and Dance in November. The sale was a great success and we raised over £500. We would like to thank Katrina May for organising the Jumble Sale, and also everyone who supported on the day and the members of the community who donated items to be sold. 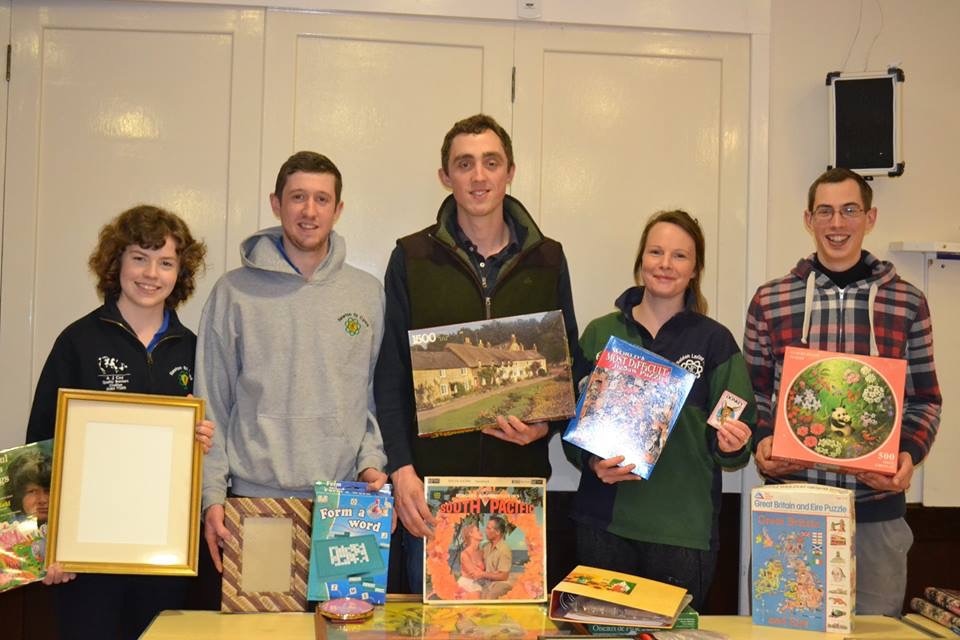 ​
If you’re interested in finding out more about YFC, please feel free to come to along to our next club meeting on Tuesday 28th February at 8pm held at Newton St Cyres Village Hall. For more info, call club chairman Georgina on 07801273424.
​
Haldon YFC Tug of War 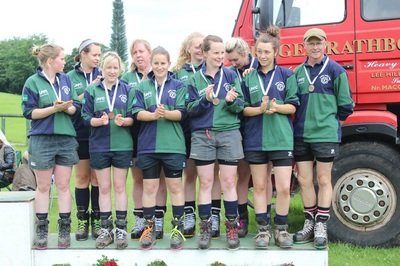 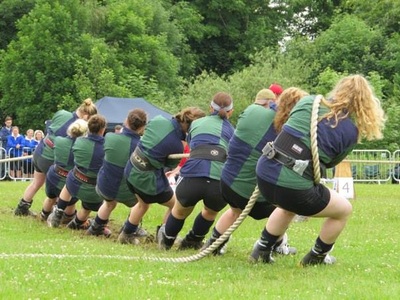 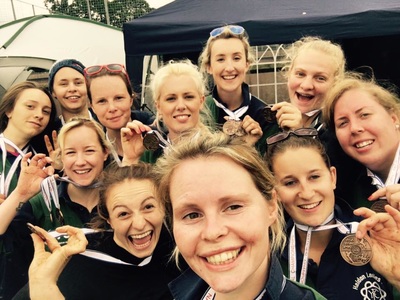 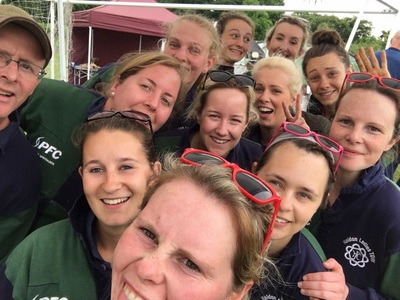 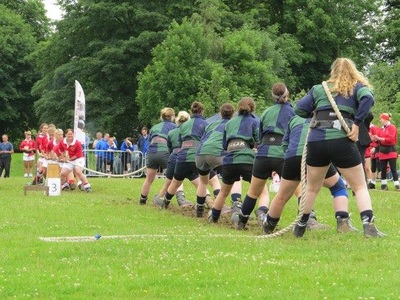 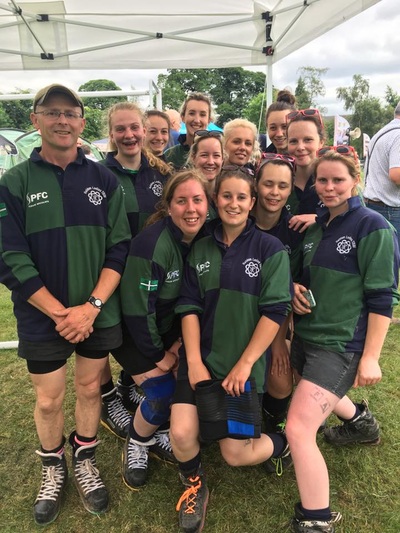 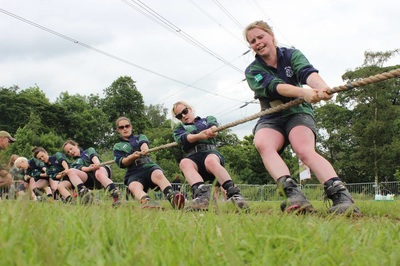 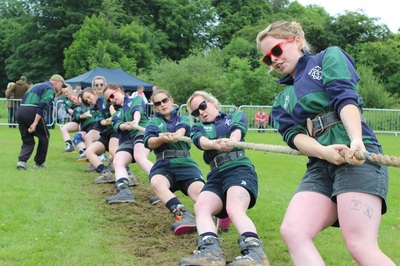 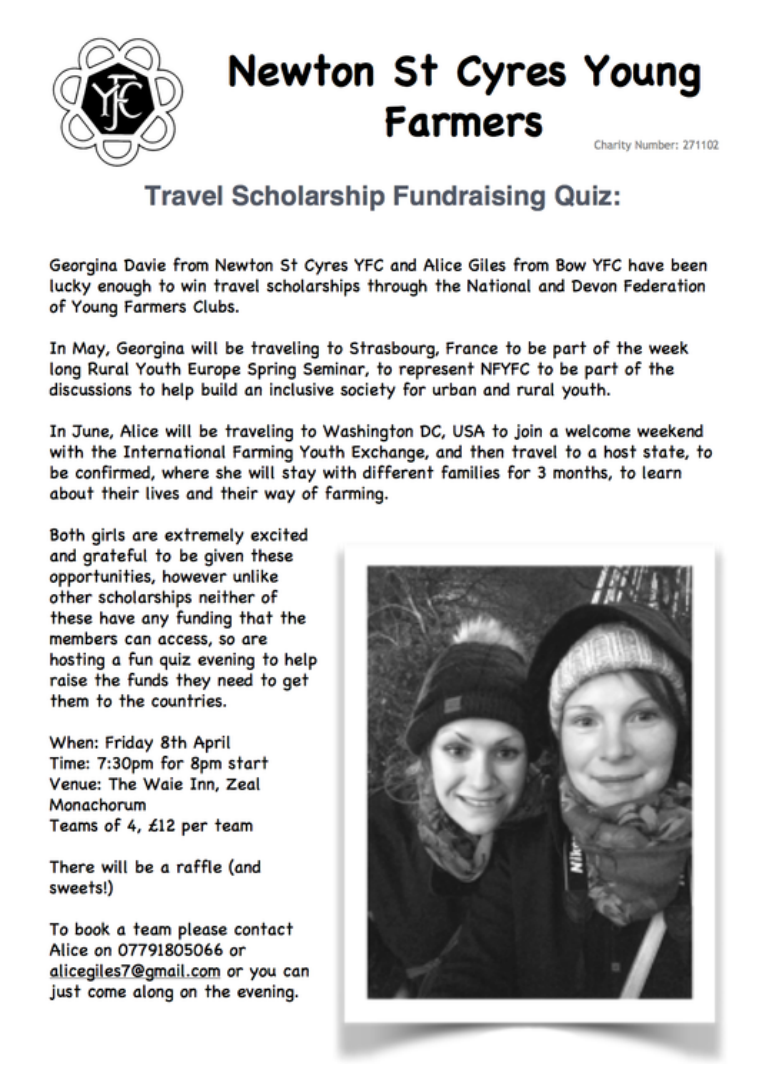 Our next event:- https://www.facebook.com/events/887839621311200/
Newton St Cyres Young Farmers Club held their AGM on 15th September with Stuart Luxton standing as the new President, Robert Cheriton as Chairman, Georgina Davie Vice-Chairman and Millie Murphy as secretary.  The club is going from strength to strength with an increased number of members since the new members evening arranged to recruit younger people, and a selection of activities and club socials held within the first month.


Millie Murphy competed at the County round of the Call my Bluff speaking competition representing Haldon Group, whilst Georgina Davie competed in the Just a Minute.
One of the first club activities included helping at the Exeter Matford Centre Car Boot Sale raising funds for club socials, whilst on the same day, Georgina skydived 15,000ft at Dunkeswell for the charity Survivors of Bereavement by Suicide (SOBS).


The club members recently held a film night at The Lamb Inn, Sandford, attended the County Harvest Festival at Exeter Cathedral, bagged dung for the Newton St Cyres Friends of the Station, spent an evening carving pumpkins and enjoyed a club football social at the Crediton Leisure Centre. Georgina is currently practising for Ballroom dancing which is a county competition taking place in December.


The social programme for the club has been planned for the next two months, with their 78th Annual Dinner and Dance being the next main event, taking place at Tiverton Best Western Hotel.  Tony Kemmish, St Boniface Vet, will be guest speaker alongside music from The Toaks, trophy presentation and a three course meal. For tickets contact Georgina  on 07801 273424.
Haldon Young Farmers Ballroom Success

Ten members from Haldon Young Farmers are celebrating after winning the County Finals of Ballroom Dancing.  The members beat off competition from six other teams in the competition held at Ashill Village Hall on Friday 4th December.

With a 'Tomorrows World' theme, the dance group performed a lively and entertaining show dance including Quick Step, Waltz, Jive and Paso Doble.

The dancing competition aimed to teach members the skills of ballroom dancing, confidence, teamwork, decision making and choreography.  Points were awarded for a range of different techniques and skills, and Haldon Group were placed 1st, 25 points ahead of the second team.

The dance group will be heading to Weymouth in March 2016 to represent Devon in the South West Area finals of Ballroom Dancing. 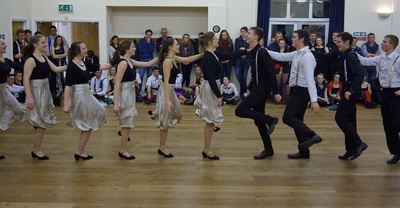 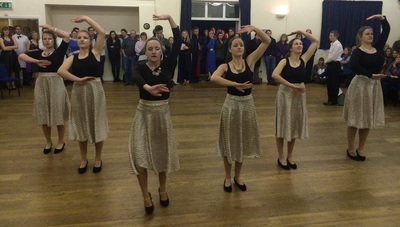 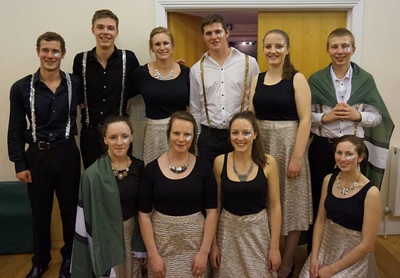 January 2016 Report
What a busy month Newton St Cyres Young Farmers Club have seen, this year has defiantly started with a bang we are just as busy and hectic as ever. On January 2nd 7 members of the club went of skiing in Val Thorens on a County organised trip, what a fantastic week, if we don’t mention Millie getting stuck in the lift! The snow was fantastic, as was the resort and local culture, a brilliant week was had by all both on the slopes, in the spa and out and about trying as possible, roll on many crepe stalls as 2016’s trip is all we can say! Just because a few of the members went of Skiing it didn’t stop the others who were left behind from having a good time, 12 members took part in a circus skills evening and had a great time learning how to be the next best performers Newton has ever seen! This was followed by a trip to the pantomime of Jack and the Beanstalk in Plymouth on Thursday 15th January, what a show, everyone thoroughly enjoyed themselves.


The club is going from strength to strength with an increased number of members since the new members evening arranged to recruit younger people, and a selection of activities and club socials held within the first month.


The audience also got a taste of the Haldon Group choir with their performance of ‘Best day of my life’ by the American Authors, and a Lion King medley. Tim Matthews gave the choir group advice for the next round.
The choir, drama and members of the year will go through to the County competition which will take place on Sunday 14th February in Paignton. The group ballroom dance team also performed their routine which won at County round, the team are practising for the South West Area competition which takes place in Weymouth in March. 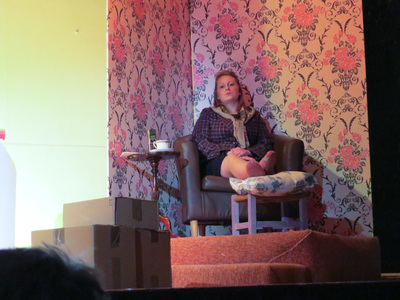 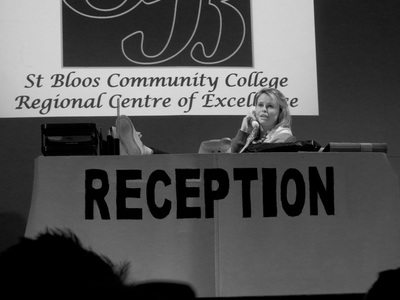